The Music in My Head: Five Ways of Hearing a Poem 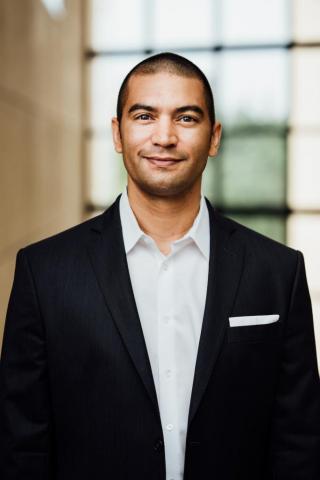 The great poet Etheridge Knight said, “Making jazz swing in / Seventeen syllables AIN’T / No square poet’s job,” but what is a poem that doesn’t embrace its inner music? In this 1 week intensive course, we will look at 5 different ways to make the sounds in a poem more melodious: lines, rhymes, repetition, interior sounds, and exterior sounds. We will read a range of poets who will illustrate each type of music making and will also consider ways in which to implement these types of music in our own work.
In addition to freewriting and other generative exercises, students will be expected to work on 3 different poems during the week: one that is newly generated (based on a prompt), one that is a revision of a recently written poem, and one wholesale revision of an older poem. At the end of the course, each student will receive an email with additional suggestions and ideas related to the work we’ve done together.

Adrian Matejka ​is the author of The Devil’s Garden (Alice James Books, 2003) which won the New York / New England Award and Mixology (Penguin, 2009), a winner of the 2008 National Poetry Series. His third collection of poems, The Big Smoke (Penguin, 2013), was awarded the 2014 Anisfield-Wolf Book Award and was a finalist for the 2013 National Book Award, 2014 Hurston/Wright Legacy Award, and 2014 Pulitzer Prize in poetry. His new book, Map to the Stars, was published by Penguin in 2017. Among Matejka’s other honors are the Eugene and Marilyn Glick Indiana Authors Award, two grants from the Illinois Arts Council, the Julia Peterkin Award, a Pushcart Prize, and fellowships from the Guggenheim Foundation, the Lannan Foundation, and a Simon Fellowship from United States Artists. He teaches in the MFA program at Indiana University in Bloomington and is currently working on a new collection of poems, Hearing Damage, and a graphic novel.