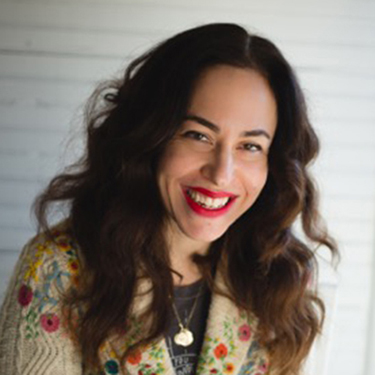 Sabrina Orah Mark is the author of the poetry collections, The Babies and Tsim Tsum. Wild Milk, her first book of fiction, is recently out from Dorothy, a publishing project. For The Paris Review she writes a monthly column on fairytales and motherhood entitled HAPPILY. She lives, writes, and teaches in Athens, Georgia.

EVERYTHING WAS BEAUTIFUL AND NOTHING HURT

“If you love Poems so much,” says the bully, “why don’t you marry Poems?” I have wandered onto a playground, accidentally. I am a sixty-seven year old woman standing on the 3 of a hopscotch game blurred by last night’s rain. It is September. The swings smile their black rubberish smiles. I smile back, politely. “What’s your name, Bully?” Bully puffs his chest out. “Beadlebaum,” he says. “Listen, Beadlebaum, I did marry Poems. We’ve been married for years.”

There is a space between Beadlebaum’s front teeth that reminds me of Poems.

My cell rings. It’s Ma. I tell her about the bully. I tell her his name is Beadlebaum and that the space between his front teeth reminds me of Poems. “Describe,” says Ma. “Like wild shade,” I say. “More,” says Ma. “Like an empty bible,” I say. “How’s that?” asks Ma. “Like if the bible was a room you could walk inside and there was nothing. No genesis, no exodus, no numbers, no god. No light, no darkness.” Ma is silent. Beadlebaum coughs. “I don’t really know,” I say. “Stick with the shade,” says Ma.

Beadlebaum’s fists are clenched. He jumps and sways around me. He is shouting. “If you love Poems so much, why don’t you marry Poems?” Beadlebaum is a bad listener. I crouch down and look Beadlebaum straight in the eye. I do not like repeating myself, but this time I do. I must. “I did marry Poems.” For proof, I flash my band. Beadlebaum squints. “And not only did I marry Poems, but at the time we married it was only legal to do so in six states. We married in Iowa, Beadlebaum. Iowa. Have you ever believed, Beadlebaum, in something much, much bigger than you?” Beadlebaum is sweating. “Liar!” shouts Beadlebaum.

“Listen, Beadlebaum. It’s a bad economy. You are trying to spend me when I’ve already been spent.” I sit him on a bench and tie his shoelaces. “Some would say we’re in a depression, Beadlebaum. Over the years I applied for dozens and dozens of jobs. I killed many interviews. Slaughtered them, in fact. I held those who may be concerned to my bosom and answered their questions so expertly I left them weeping. Weeping into my skin, Beadlebaum. Was I sloppy at times? Perhaps. Was my perfume magnificent? It was. Was I overly prepared? Never. Did they call me back, Beadlebaum? No they did not. No one was really hiring. And if they were hiring they weren’t paying. And if they were paying they were only paying Donald. Do you know Donald, Beadlebaum?” Beadlebaum shakes his head no. “Do you know why you don’t know Donald? You don’t know Donald because nobody knows Donald. Donald doesn’t exist. Donald is the man none of us will ever be.”

I peel Beadlebaum a hard-boiled egg and offer it to him. He turns his face away.

Ma calls. “Do you need milk?” She is shouting. She thinks I am always in the need of milk. “Not now, Ma,” I say. “I am getting somewhere.”

Up and down the seesaw we go.

Poems is looking for me. Sometimes I get lost, like today.

Ma calls. She tells me she is reading Slaughterhouse Five. “It says here,” says Ma, “Everything Was Beautiful And Nothing Hurt.” She says this to reassure me. As if she’s reading the newspaper, and not a drawing in a book of a gravestone. Ma’s sharp, but lousy with fiction. Beadlebaum holds my hand. We watch the toads hop across the damp ground. “They know something we don’t know,” says Beadlebaum. And they do. The toads do.

Just when I begin to wonder if Beadlebaum is a real child, Poems shows up. Beautiful Poems, the color of upturned soil.

Poems cries so hard a cloud bursts, and children spill out. They fall through the air. Their legs and arms go in every direction like sunshine. They land softly. They flood the playground in brightly colored pajamas.

They are carrying books, keys, bones, the bareness of my being. Some are carrying each other. They march up to Beadlebaum and surround him. Of all the children, Beadlebaum seems the most elderly. Pale Beadlebaum. In his fake corduroy shorts.

Ma calls. “There is no such thing as fake corduroy, says Ma. Only corduroy, regular. It’s like skin,” says Ma. “It’s either skin or if it’s fake it’s something else.”

Now Beadlebaum is in the middle of a thick circle of children who have fallen from the clouds. They do not taunt him or throw at him bones. They just stare and hum and ask Beadlebaum who he loves. “Who do you love, Beadlebaum?” the children call out.

Ma calls. “It’s impolite to love no one,” she says. And Ma would know. I tell Ma my head is bleeding. “Of course it is,” says Ma.